Slavery was truly a hot button topic between 1810-1860, particularly in the west. In 1808, U.S. Congress outlawed the Atlantic slave trade, although illegal slave trading continued. The domestic slave trade was stimulated heavily by agriculture in the south. The national breakdown over slavery occurred over a long timeline and across a broad geography. Debates over slavery in the American West proved especially important. As the United States pressed westward, new questions arose as to whether those lands ought to be slave or free. The framers of the Constitution did a little, but not much, to help resolve these early questions.

In this assignment I want you to explore, How did the federal government try to resolve the issue of slavery in the western territories during this time period? And, what exactly was the Slavery Issue in the West? Do you believe that civil war was unavoidable? And, why?

Also, take this time to respond to at least one (1) classmates response and discuss the different tactics that the Federal government tried to take to appease both Northern and Southern legislators. 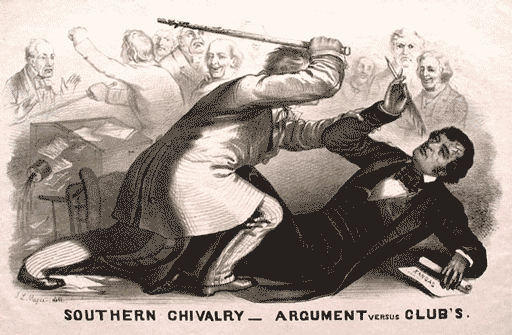 SOUTHERN CHIVALRY by John L. Magee is in the Public Domain .

In late 1846 Congressman David Wilmot submitted his “Wilmot Proviso,” banning the expansion of slavery into the territories won from Mexico. This gained northern support, passed the House with bipartisan support, but failed in the Senate. In 1848, The Free Soil party called for an end to slavery in Washington DC and on slavery’s expansion. The Compromise of 1850 tried to offer something to everyone, but only worsened the sectional crisis. Based on popular sovereignty, The New Mexico territory and Utah Territory were allowed to determine to be slave or free states, and the Kansas-Nebraska Act gave residents the ability to vote to decide whether slavery would be allowed. Also included was The Fugitive Slave Act, which authorized officials to capture and return alleged escaped slaves to their owners without trials.

I believe the Civil War was unavoidable. The tension between those who were proslavery and those who were antislavery was far too great and only growing. The westward expansion led to several debates about the fate of slavery in the West and the Missouri Compromise only increased the divide between the North and South.

2. Intellectual journey- summative (Worth 40% of the total module mark. The second part of coursework 1 will be marked by tut...

On page 46 of the Taking Sides text, Paul Farrell lists 12 environmental “Time-Bombs” that may occur in our future. Write a t...

I want to do research for cellphone

Part 1: Post a ResponseIn 2013, imagine that your friend graduated from Better Business University, and the university’s pres...

Working Through it!: Conflict and...

Independent studies: What did you select physical therapy not another career? Are there areas of specialization in physical t...